An awesome winter weekend away...

So I had planned an overnighter a while back and had put it on the kiwibiker website. The response was phenomenal - the biggest cruiser overnighter to date! - in fact we had 17 bikes and 24 riders and pillions on the journey.

The plan was as follows - Auckland City, SH16 to Wellsford, Wellsford to Dargavillie, Dargaville to Omapere with stops at Kai Iwi Lakes and Tane Mahuta and staying at the Copthorne Omapere on the waterfront overnight. Sunday was Omapere to Kaikohe, then through the twin bridges run (with a stop at Twin Bridges), then on to Waipu for lunch, through Laings Beach and Mangawhai and home to Auckland City.

Saturday morning began with the weather gods being very kind (in fact the whole weekends weather was awesome from beginning to end) Eight bikes started at the first point. We met early for a great breakfast at then took off down the north western and out through SH16 to meet up with a further seven bikes at Wellsford. It had obviously pelted down through the night and SH16 was sopping wet in places and combined with a major diesel spill on the road and road works proved slower than anticipated. At the end of the day though, Id rather be late than not arrive at all! We arrived at Wellsford and our pick ups were champing at the bit so we didnt hang around and set off. I have to say that there is nothing more impressive than leading a ride and looking in your rear view mirror at a long line of bikes.

Because of the large number of bikes and a range of abilities, appropriate riding distances between bikes was imperative and throughout the weekend I think the team did a great job in this department.

The ride to Dargaville was fine and clear with very little on the road. We stopped briefly at Ruawai to pick up our 16th bike and carried on to our lunch break in Dargaville at the Blah Blah Blah cafe where we also picked up our 17th bike. After a decent lunch break and refueling we took the short hop to Kai Iwi Lakes where we managed a couple of photos and continued on through the Waipoua Forest and we stopped to say KiaOra to Tane Mahuta - what a mighty tree!! The rain had obviously fallen heavily in the morning and so it was softly softly through to Omapere - (what a gorgeous part of our country)

The accomodation at Omapere was quite adequate (thanks Kathey for organising an awesome deal!) and as we arrived at 4.00pm we had plenty of time to relax, unwind, tell tall tales and drink far too much. With a restaurant on site there was no need to go anywhere which meant a very sociable afternoon and evening. :)


Day 2 dawned and it was simply stunning - not a cloud in the sky! We set off about 9.30am and headed towards Kaikohe - this was a great little run, then fuel stop at Kaikohe and on through to the Twin Bridges where it was yet another photo opportunity. To keep people going after a long night we stopped in Mangatapere for a quick Flat White before heading to Waipu for lunch. At this stage a number of the team branched off to their repective homes and from Waipu one group headed to the Puhoi pub and one group headed through Laings, Mangawhai and home.

A thoroughly awesome group of people and yet another example of the beautiful roads up north and all the more reasons why riding a motorbike is such joy!

If you ride a cruiser (or you ride something else but are a cruiser by heart :)) and you're interested to join in on the odd ride (careful, because its very infectious), then shoot over to the kiwibiker website and join up. Once joined up, add yourself to the KB Cruiser Group as thats where we post our rides. Also, find member nest4u (thats me) and add me as your friend.

Picked up my new bike today...I'm in love!

Just got back from a leisurly ride on the new bike (C109r) which I picked up this afternoon. I love it!!! Quick pic below - not brilliant but gives you the idea. 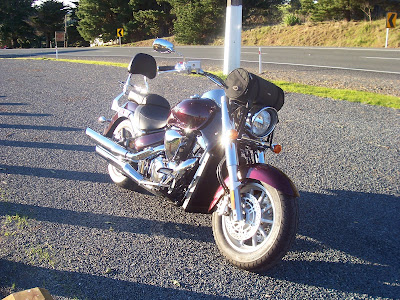 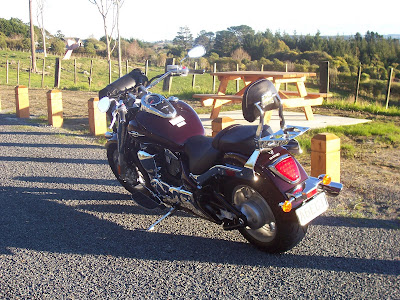 Have had a great day today when I met up with the crew and we took a leisurly ride to the Puhoi Pub for lunch, It was a gret turnout with about 19 bikes if I counted right. It was also a special day for me :) with it been the last run on my C90 before picking up the new bike on Tuesday.

Below is  great snapshot of the day - thanks to Troy for his clever recording of the ride. (You can see more of his great videos on his you tube channel at youtube/ColemansCruisers

Yes, I love my C90 but I had the opportunity to purchase a brand new C109R at a ridiculously good price. In fact I was beginning to save up for a new Triumph Thunderbird but this was just too good a opportunity to pass up. I have never owned a totally new bike so it is quite exciting :)

After much haggling and negotiating I managed to get more for my trade in than what I payed for it 10,000 km's ago :) and a whole lot of great add ons.

The C109R is a big bike - 1800CC and over 350kgs heavy and quite imposing. It is definitely not a sport bike, however, I am in love with the riding position (the same as the C90), and the larger fuel tank and the massive power if needed. I also love the colour - its maroon (dark dark red). I will pick it up the middle of the week as they are putting on a sissy bar and rack; side panniers and extra lights on the front.

Tomorrow a group of us are off to the Puhoi Pub and it will be my last chance to take the C90 out. I will be a little sad as I have equally loved this bike.

Heres a pic of the new bike (not the actual bike, but it gives you the idea)
Thanks to a couple of members at M109Riders.com for these photos :) Hope thats okay. 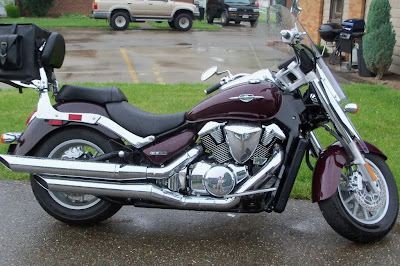 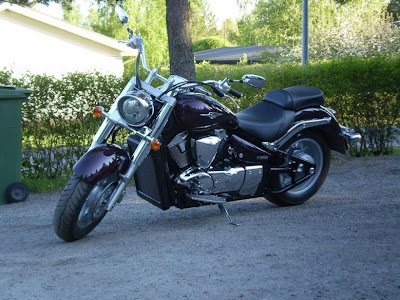 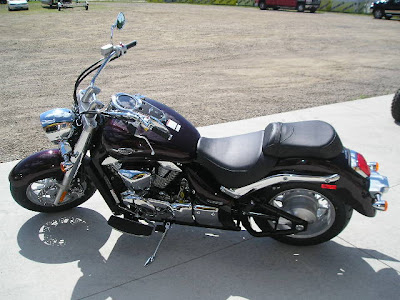 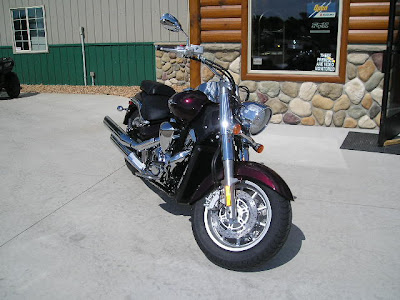